The Day I Met Jack Graydon 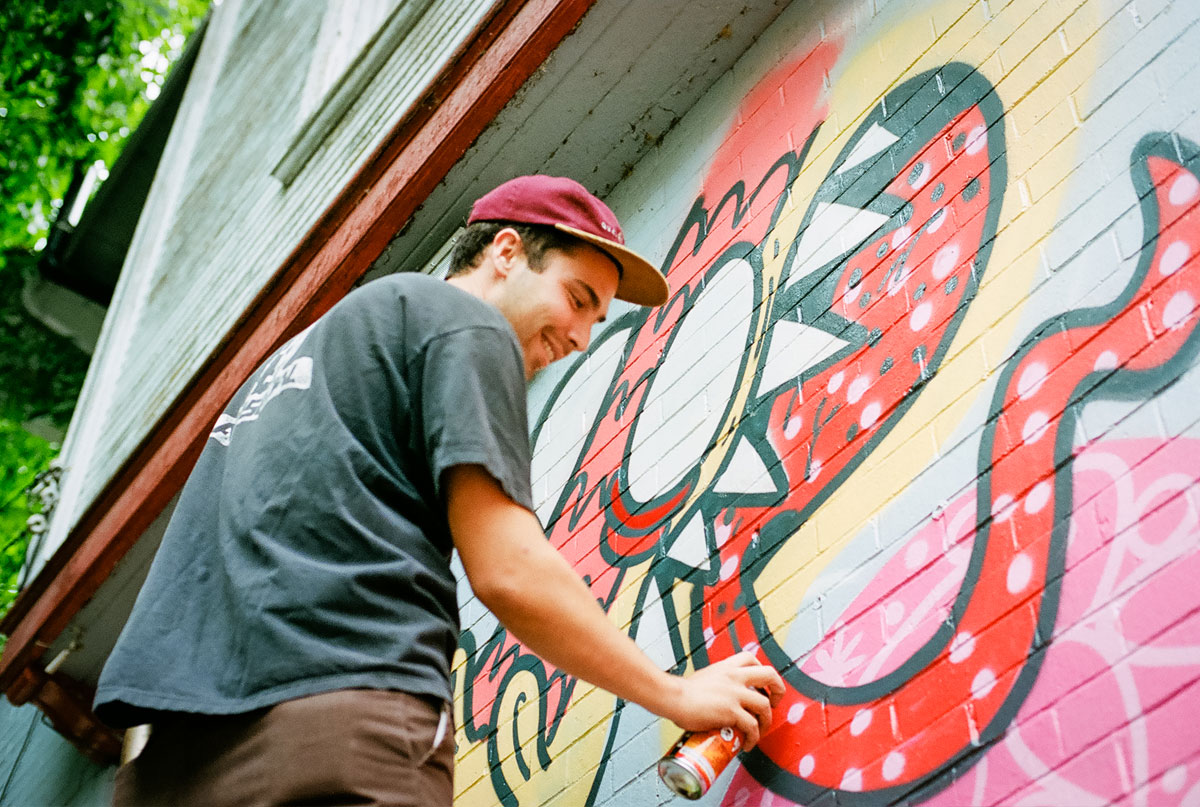 Jack paints a wall in Portland, OR. | P: erik ursine

I can still remember the day I met Jack Graydon.

It was one of those smooth Santa Rosa evenings. The hot day had settled properly, a gentle breeze softly floating by, leaving echoes of rustling leaves for all to embrace. There were throngs of folks wandering in and out of various art galleries for the first annual “SOFA Stroll” in Rosa’s tucked away art district. Although the environment radiated with tranquility, I was a bit nerve stricken. It was The Frontier Room’s opening night, and opening night anywhere is fucking scary. However, my raging wits soon settled as my eyes found the paintings on the walls—surrounding me—tickling me with vibrant colors.

Lively characters were painted on skateboard decks, canvases spanning through the sizes, and numerous other unique objects. I even recall spotting an old handsaw drenched in dazzling color and presenting a heartwarming plot. Suddenly, I was brimming with childhood nostalgia, while simultaneously staring straight into the skateboard culture, freedom, and our generation; all rolled up into a vibrant cast of characters. It almost felt as if I were peering into my own life. Quickly I forgot about the stress that ailed me, because all I could think was: “This is fucking awesome! Who is this guy?!”

Jack Graydon has been drawing and exploring art since before he could remember. His earliest influence was his father—also a talented artist—who always supported and encouraged his son to pursue the arts. Other early influences can be seen in his work today—classic cartoons such as Rocko’s Modern Life, Ren & Stimpy, and The Simpsons. As he got older, he found inspiration in works by Saif Azzuz, Barry Mcgee, Mark Mulroney, and Klutch; amongst many more.

“Inevitably, the depression that lingers over any hometown had finally got to him… It was due time for a change of scenery.”

The young Jack loved experimenting with paint; especially on walls. On a wall is where he would share his own story of growing pains. The latter, mixed with a touch of good old shit-head-teenager-decision-making, eventually got Jack into trouble with the law.

Shortly after his experience with the police, Jack began focusing on the canvas. Before long, towers of canvases began to accumulate from Jack’s ambition. Close friend, Saif Azzuz, was the first to notice the abundance of work piling up, so Azzuz began showing Graydon’s art in small shows hosted by Pleasant Skateboards. Producing pieces accelerated, and happiness followed the fun that Jack felt from creating art. Nonetheless, as time crept by, pessimism began to outweigh his passion, ruthlessly gnawing away at his dream. Inevitably, the depression that lingers over any hometown had finally got to him. In 2012, Jack left his life-long home in Santa Rosa and headed north to Portland. It was due time for a change of scenery.

Portland’s magnetic calling for unique artists and the city’s reputation for a hefty skate scene certainly drew the artist in, but after a year of floating around from one dead-end job to the next, Jack decided that he wanted to go to college. He figured that entering the animation field would lock down a sustainable future, but he forgot about a dire facet: his happiness.

During his work on a short animation film, his back finally crumbled from the insufferable sitting that the grueling project demanded. That animation film was literally the straw that broke the Graydon’s back, and next to landing him in the hospital, the artist began sinking into depression. He was not happy, and most of what he was doing was for hopes of money and recognition from others.

Jack especially enjoyed mural painting because he was no longer confined to a dingy work space. With mural painting, he could be active, explore the opaque wonders of spray paint, and be rewarded with the towering result that told tales of his soul. Mural painting brought Jack back to life. 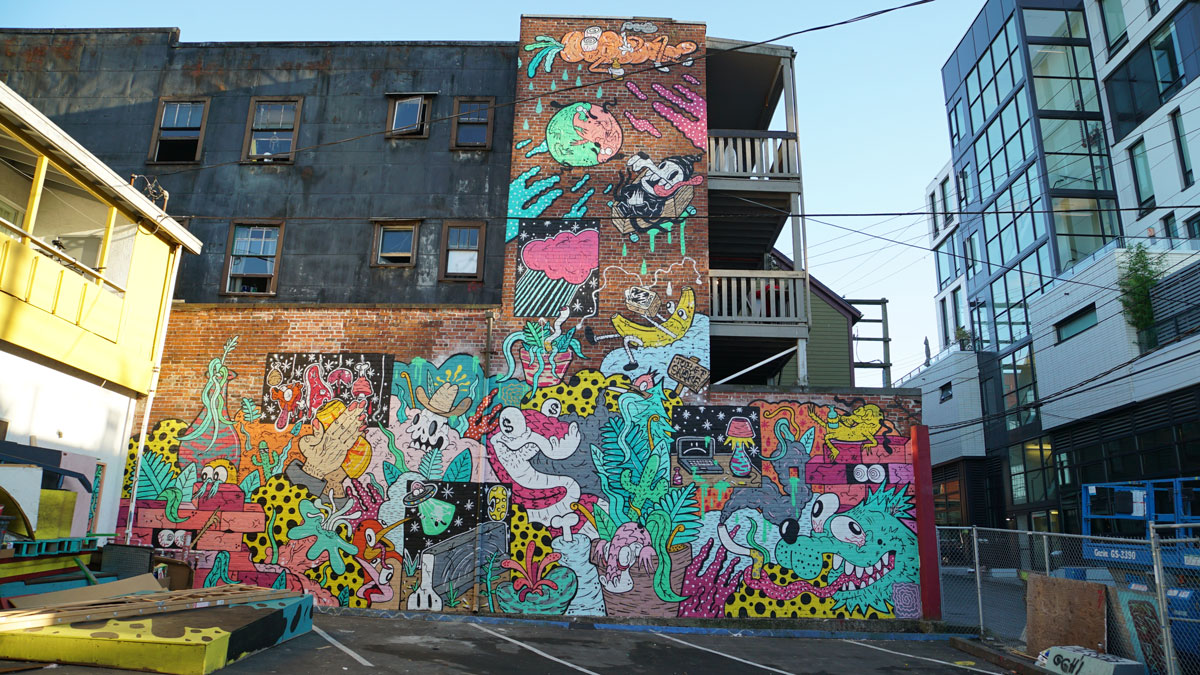 Mural in Vancouver, BC, for Antisocial Skate Shop

Mural painting brought about one of Jack’s largest projects he has yet encountered. The solo project was a colossal mural in Vancouver, BC, for Antisocial Skate Shop. Soon after the completion of his mural for the 2016 Vancouver Mural Festival, one of Jack’s major influences, the Portland based artist Klutch, invited him to join his team for another large project in Oregon. The project consisted of cloaking the walls of a Northwest skate park with colorful paint and imaginative plots—the park was privately owned by one of our old friends, Silas Baxter-Neal. Excited as all hell to be invited onto the project, Jack joined a group of artists that he himself looked up to amidst his growing up; Klutch, Dominic Sigari, McTools, and Kango. After Jack tucked the skate park success story under his belt, another exciting moment was approaching the young artist: graduation. 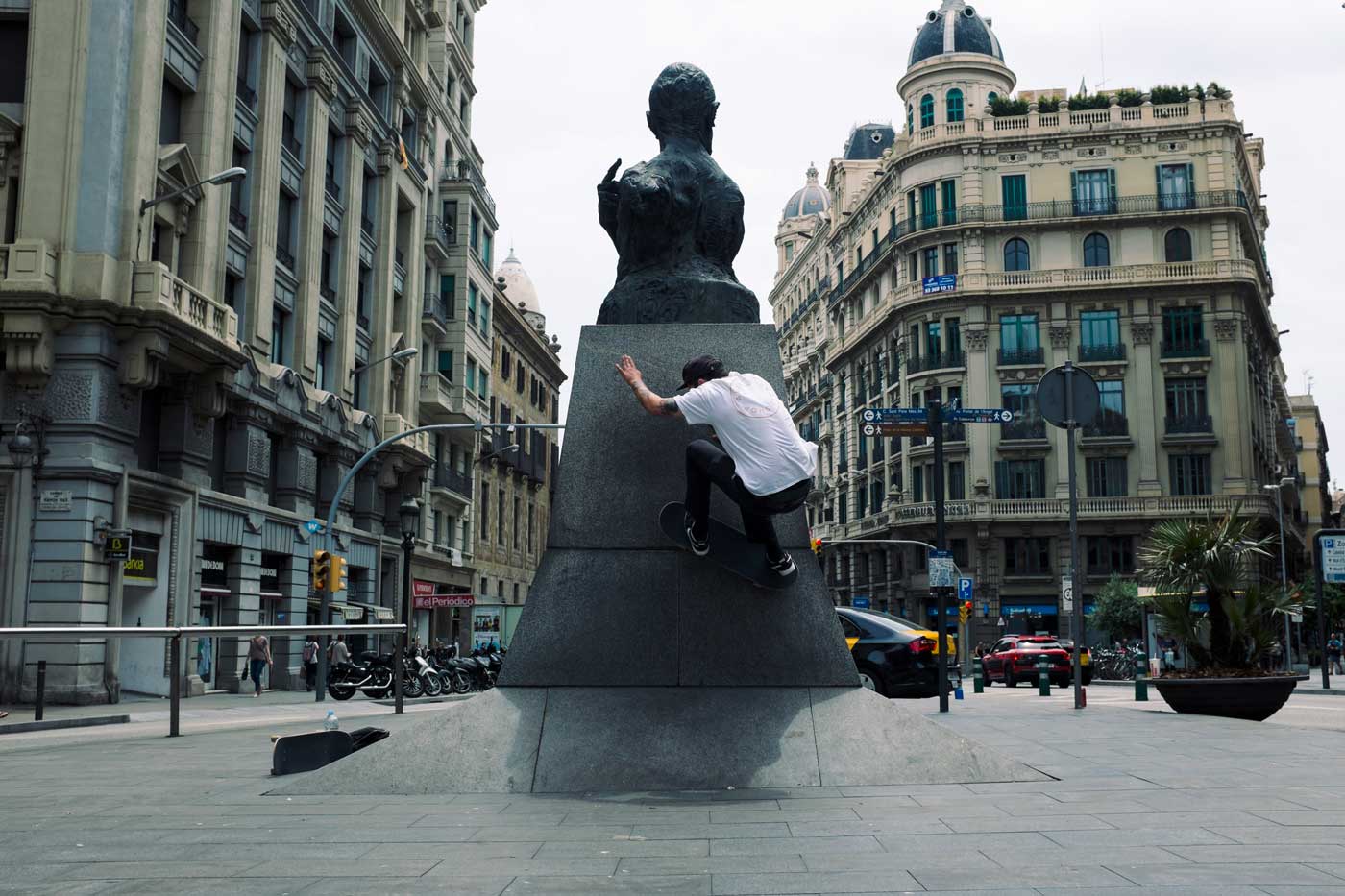 Although the artist disliked the confinements of the Pacific Northwest College for Art, he also appreciated learning the ropes of the art game—an opportunity that he took to maneuver his own contributions into the business. For four years, he kicked serious ass and graduated nevertheless. Before he left college, he was awarded with two honorary achievements: The Abraham and Anna C. Helman Thesis Award (2017), and the Center for Contemporary Art and Culture Award (2017). Soon after graduation, the artist immediately followed his adventurous soul, and took off to Thailand. 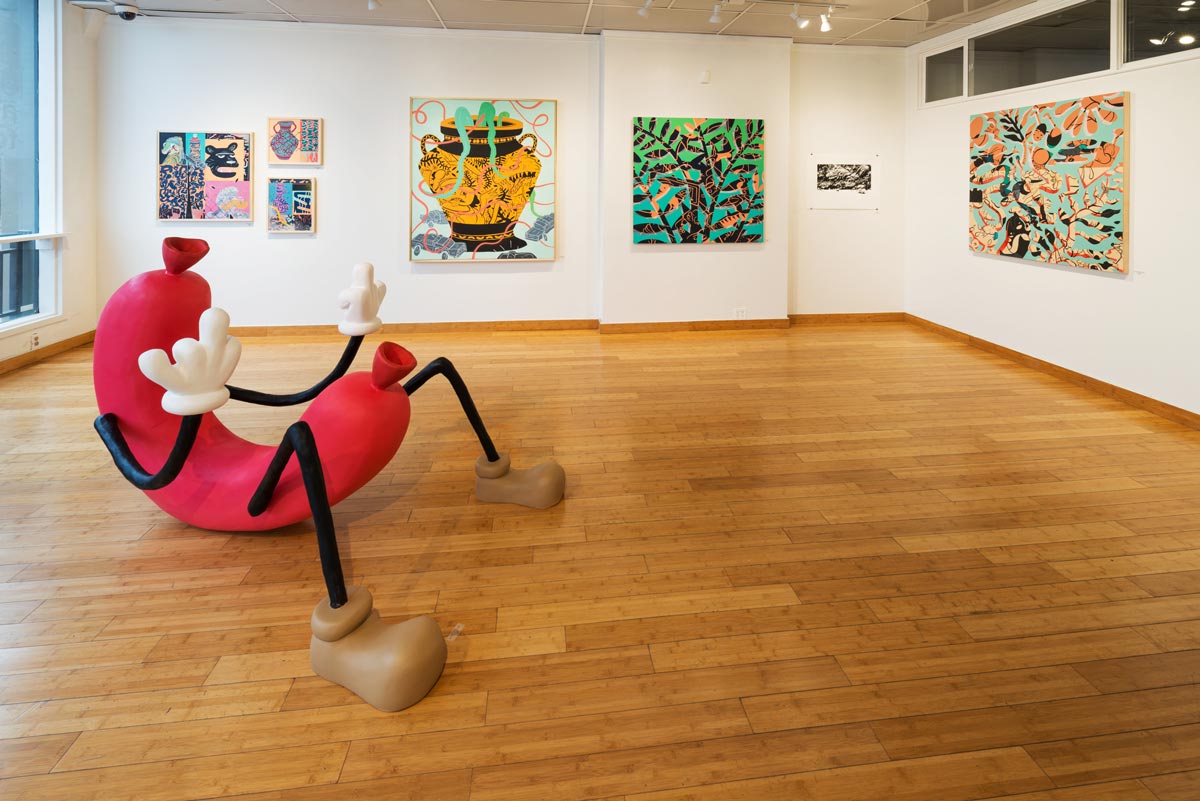 Today, Jack is back in Portland, and has no intention of letting up in the ass-kicking department. He plans to continue to pursue his passion in skateboarding, traveling the globe, and painting; solidifying a career in making art, while perfecting the craft that has at so many times alluded his sense of direction. It’s hard to believe that so much time has passed since The Frontier Room’s opening night with Jack Graydon, but it is remarkable to see how far he has come.

“Jack may not be aware of his talent, and the effect it has on others, but that’s irrelevant.”

Yes, I remember the day I met Jack Graydon—but it doesn’t feel like a memory. I would better describe it as an expansive moment, one that battled itself out of that faraway day, and has exploded onto the infinite walls of the future. Jack’s paintings shared their joy with me on that distant Santa Rosa evening, so it feels good to know that they’ve escaped the confinements of the Bay Area. Today, more people are now getting the opportunity to feel that same exuberance I first felt when introduced to Jack, and his work. His paintings reflect his love for travel, creativity, and skateboarding, while also sharing his own story.

For me, Jack’s work encapsulates a world that is very real in my own eyes. Jack may not be aware of his talent, and the effect it has on others, but that’s irrelevant. It doesn’t matter what he thinks, because if Jack Graydon continues to do what he does best, he will continue to dazzle our eyes, our imaginations, and our hearts. 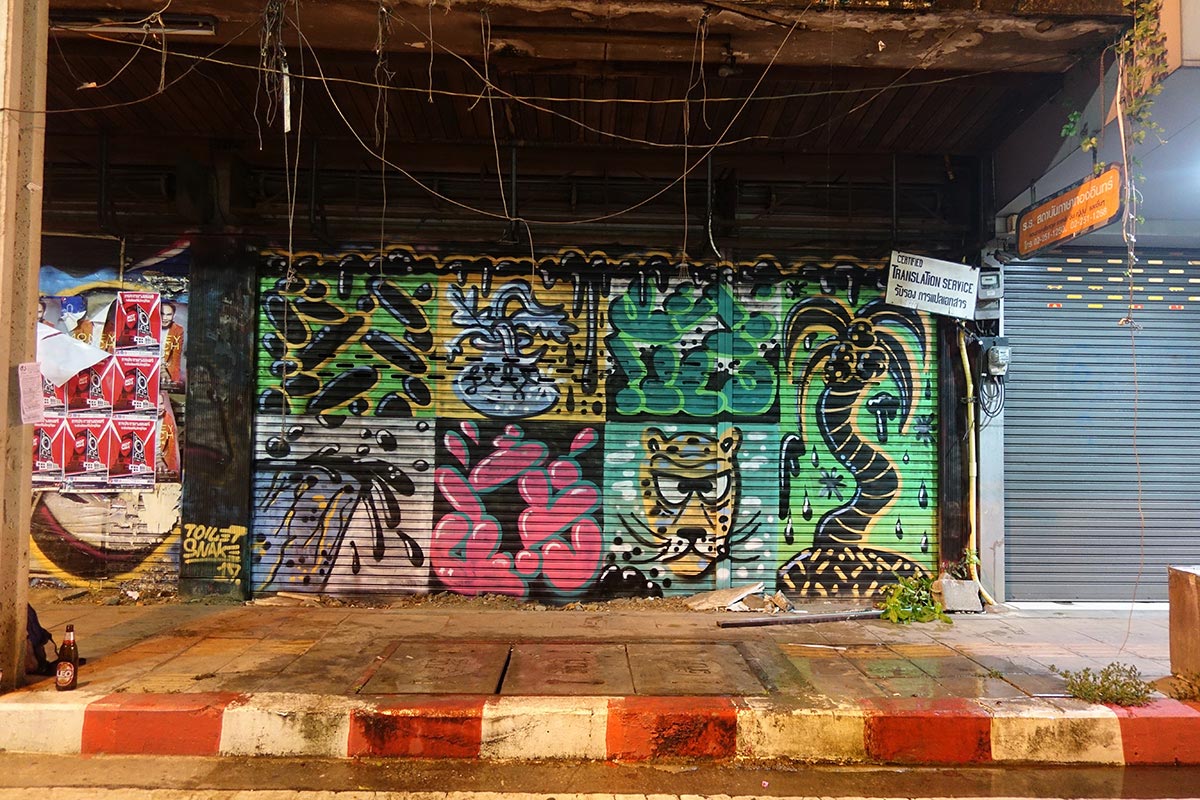 To keep up-to-date with the Portland artist, check out his new portfolio at www.jackgraydon.com